At the edge of a sprawling pine forest in southern Sweden, a blond boy who is just shy of his second birthday fearlessly scales some tall, moss-clad boulders like it was nobody’s business. Below the rocks, three brothers wearing rain boots are wading around in a creek and building a habitat for a frog they just found. Nearby, I watch as a group of preschool-aged girls are busy racing pine cones down a repurposed waterspout. 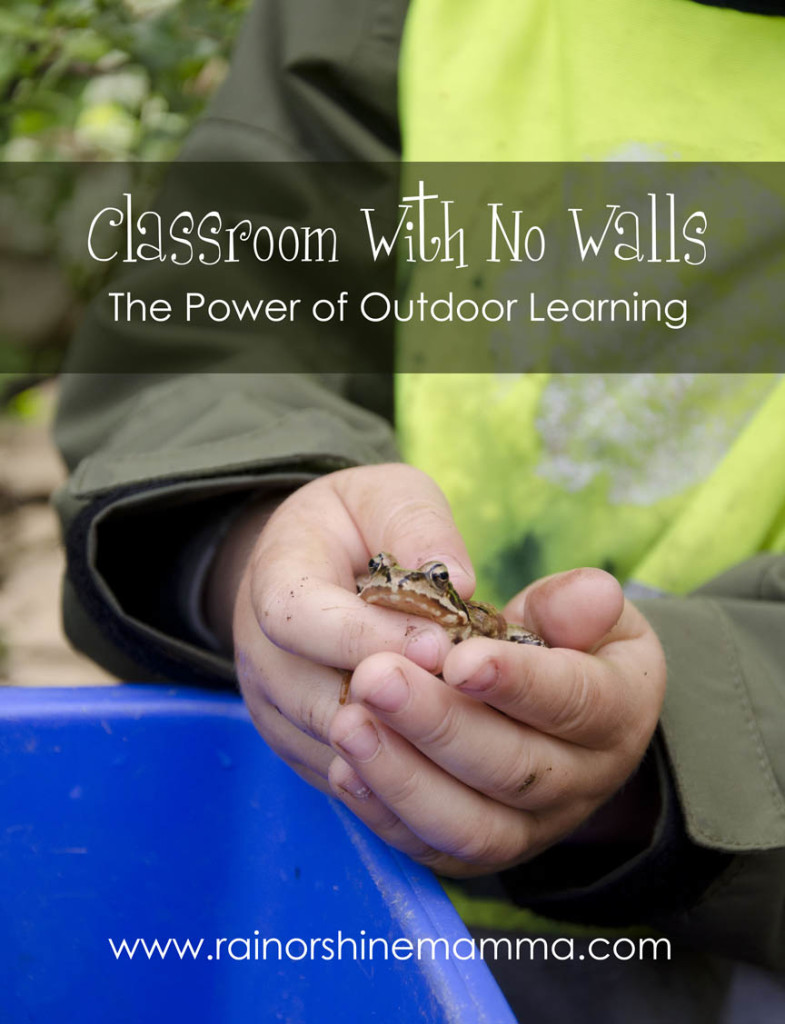 There is no fence in sight and the boundaries mainly consist of natural features – the creek, the grove of birch trees, the wind break and so on. The adults in charge are supervising from a distance, while cutting up  some fresh pears and apples for a mid-morning snack. There is a building on the property – but it is used sparingly since the children play, learn and often eat outdoors every day – rain or shine. Welcome to forest school, Scandinavian style!

I grew up in Scandinavia, where the first forest schools, or outdoor nurseries, started cropping up in the 1950s. Although I didn’t attend one myself, my friends and I were raised in the same nature-loving culture that inspired the forest schools. My hometown is roughly on the same latitude as Juneau, Alaska, but we played outside all year round, cheered on by parents and teachers who would all respond with the old Scandinavian catch phrase “There is no bad weather, only bad clothes!” should we ever complain. (A phrase which, by the way, continues to guide this blog.)

After moving to the US and having children of my own, my interest in forest schools and their practices and principles started to grow. The main goal of outdoor nurseries/preschools in Scandinavia is to forge a bond between children and nature, so that the children will become knowledgeable about the environment and take good care of it as adults. As it turns out, there’s plenty more to like about them.

“We’ve found that children at forest schools have significantly fewer sick days and better motor skills, and they’re fitter and more attentive than children at traditional preschools,” says Patrik Grahn, a landscape architect and biologist at the Swedish University of Agricultural Sciences (SLU) who conducted one of the first groundbreaking studies on forest schools back in 1997.

In nature, children’s interactions also tend to become more imaginative and allow for elaborate role-playing games. “Play in itself has a therapeutical effect on children,” says environmental psychologist Fredrika Mårtensson at SLU. “And they play differently outside. The games are more open and flexible, and it’s easier for them to organize the situation in a way that’s beneficial to them physically, socially and psychologically.”

In Sweden, forest schools seem to be particularly popular among parents who themselves enjoy an outdoorsy lifestyle. “I think it’s great that they’re outside in the fresh air instead of inside with all the germs,” says Malin Utter, whose three children (aged 1.5, 5 and 7) are all attending an outdoor nursery and after school program. “Plus, they run off a lot of excess energy.”

Forest schools are common in Europe, especially in Germany, which according to Der Spiegel boasts over 1,500 so called waldkindergartens. They are also surging in popularity in countries like the UK, South Korea and Japan. In Sweden outdoor nurseries recently got a boost as the youngest member of the royal family, Princess Estelle, 2,5, enrolled for her first semester at a cooperative forest school. “For us it is very important that nature becomes a natural part of the children’s everyday life,” Estelle’s mother, Crown Prince Victoria, told Radio Sweden as she accompanied her daughter to the first day of school.

Learning at forest schools is less focused on traditional academic subjects and is typically child-led, play-based and rooted in hands-on experience. It is also naturally interdisciplinary, according to Juliet Robertson, founder of Creative STAR Learning Company and a leading outdoor education consultant in Scotland. “I would argue that the experience is richer when it takes place outside,” she said about outdoor classrooms.

For example, Robertson said, if children use leaves to learn how to count objects, they may learn to identify that type of leaf and the plant from which it came. They may also learn that on windy days, leaves blow away if you don’t hold them tightly or put a stone on top, so they need to be more adaptable to environmental circumstances. They will have collected the leaves in order to count them. This means making a decision that directly impacts on the environment – do they pick leaves growing from a plant, and if so which one? Or, do they only collect leaves that have fallen on the ground?

“You learn none of these things in a classroom counting plastic elephants,” Robertson said.

Compared with Europe, the forest school movement in North America has been slow to catch on, and in the U.S. there are only a couple of dozen nature preschools in operation. So what if you’re not one of the fortunate few who live near one? Try to encourage your child’s preschool or daycare provider to get outside more. And if your children are in grade school, promote the idea of an outdoor classroom to the parent teacher organization or administration. More importantly, “Make time outside of school for lots of outdoor experiences,” Robertson advised.

If you’re in need of ideas for outdoor learning, check out Nature Rocks, the Children and Nature Network and Be Out There, as they are all great resources for connecting children with nature. Hopefully you’ll also be inspired by my DIY Forest School series here on the blog. If you missed the first two posts, I’ve previously written about counting with nature and exploring small worlds.

10 thoughts on “A Classroom with No Walls: The Power of Outdoor Learning”