I love family camping. LOVE it. The fresh air, the simplicity, the mindfulness that comes from unplugging and worrying about nothing but where to pitch your tent and make the perfect campfire. But let’s be honest, sometimes family camping doesn’t exactly go the way you had planned.

When we headed down to Mammoth Cave National Park in Kentucky for a long weekend last Thursday, I really thought I had it all together. Camping totes organized and categorized – check! Campground reservations made – check! Car filled up with gas – check! For the first time in our family camping history, I even had a checklist for the food. Check!

There was just one thing beyond my control – the weather. As our family camping trip drew closer, I anxiously checked the forecast, which called for temperatures ranging from low forties to mid-fifties and rain. Lots of it. (Before you throw my catch phrase “There’s no such thing as bad weather” back at me, please be aware that my mom already took care of that.) Now, I’ll happily stomp around in the pouring rain all day long, as long as I have a way to get warm and dry afterward. Which is hard to do in a tent, especially when it’s forty degrees outside and so wet you can’t even make a fire.

Mammoth Cave National Park is a four and a half hour drive from our home, and since we knew we’d arrive late Thursday night, we had already decided to stay the first night at a Sleep Inn near the interstate in Cave City. Friday morning we woke up to overcast skies, rain and more of the same in the forecast. At least it would be a good day to go underground and explore the longest cave in the world. Given the weather, I wanted to get us on the Grand Avenue tour, which at four hours total is one of the longest tours available. But while I had been busy patting myself on the back for making a food checklist and organizing my camping gear, I’d completely missed that the park “highly recommends” booking your tickets in advance. Now the Grand Avenue tour was already sold out. Worse, the tours for Saturday and Sunday were more or less sold out too.

Adding insult to injury, the weather wasn’t getting any better and I sheepishly found myself longing for our hotel room. The night before it had seemed so generic and bland, but now it beckoned with luxuries like heat, dry sheets, television and wi-fi. I couldn’t help but wonder if our family camping trip to Mammoth Cave National Park would be the first in history that would feature neither camping nor caves.

But no, at the very last minute I was able to snatch up tickets for two shorter, back-to-back tours of the caves for Friday. I then turned my attention to the camping situation. The girls had spotted a cluster of small, rustic cabins on our way in to the visitor center, and rather than risking a camping disaster, I booked one of them for two nights. As it turned out, the cabin was only a small step up from a tent – it had beds and a small bathroom, but no insulation or heat. At least the girls were excited. So excited, in fact, that they quickly came down with a case of cabin fever and ended up in endless fights over some brochures of the caves. I capitulated and went to bed early that night, wearing three layers of clothing and fleece blankets piled high on top of my comforter.

Saturday morning, I woke up in a sour mood, wishing I could just build an ark and sail away from this botched family vacation. It was forty degrees outside, but somehow it felt even colder in the dark cabin. The girls were snuggled up right next to me, but I was still freezing to my core. Then, when I reluctantly dragged myself out of bed and got working on breakfast, a couple of things struck me. A) The girls hadn’t complained at all about the situation. In fact, they had rolled with the punches better than I had and contentedly ate their raw oats and milk without complaining about the lack of a hot breakfast. They were still really excited about this vacation and couldn’t wait to get out and make the most of the day, rain or shine. B) Even though we had been pretty miserable the night before, I knew that we had made the right decision by staying at the cabin in the park rather than throwing in the towel and heading back to the hotel. Sure, the Sleep Inn would’ve been more comfortable. But the cabin was definitely more memorable. 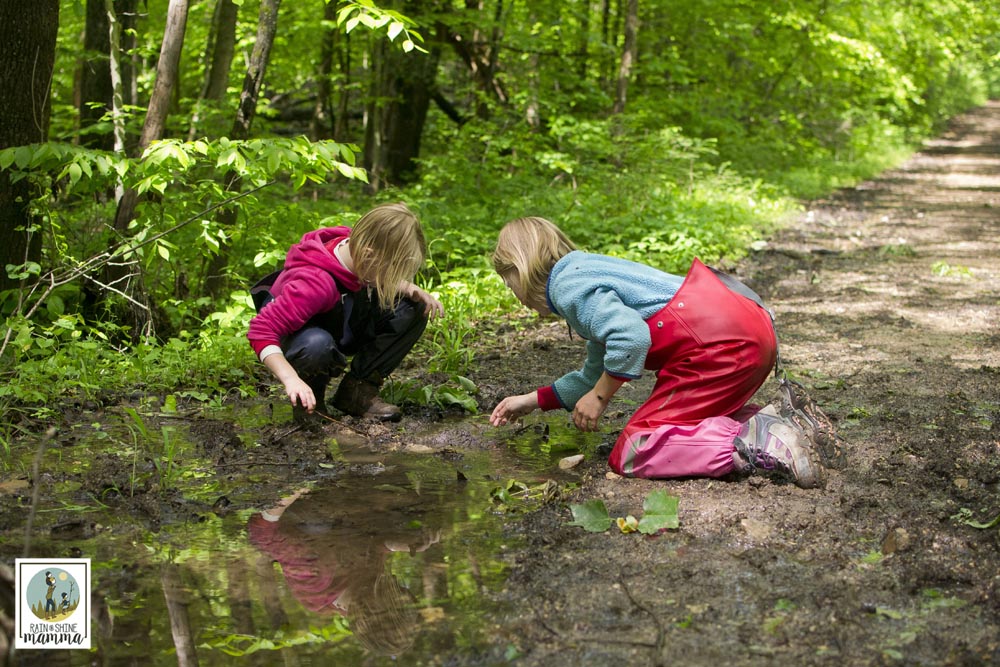 As my mood improved, so did the vacation. Saturday morning we were able to get tickets to Diamond Caverns, outside of the national park, which proved to be nothing short of spectacular. Chances are we never would’ve found them had we pre-booked our tickets for the tours in the park. Then, around lunch time, it finally stopped raining. We set out on a 5.5-mile long hike through the park and made it around just in time for dinner. Back by the cabin that night, I made mac and cheese on the camp stove, while three deer quietly passed by, not even fifty feet away. After dinner, the girls found a group of kids to play with, and several of them quickly became their new “BFFs”. The cabin was still cold, but a little less so than the night before. After a game of tag in the dark with their newfound friends, the girls fell asleep the moment their heads hit the pillow. 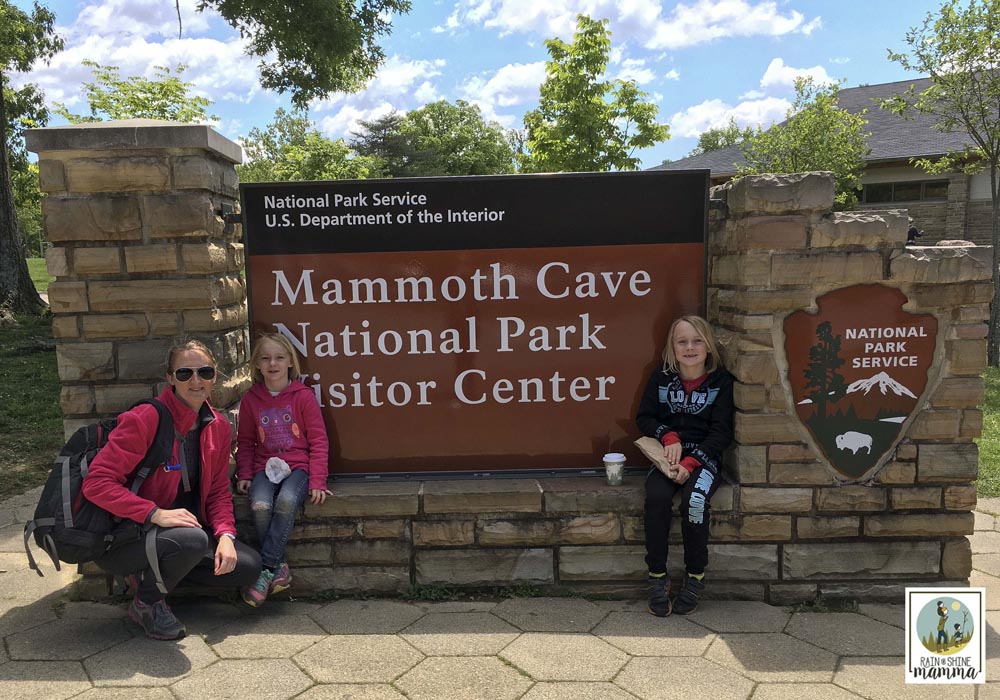 Sunday morning – our last day at the park – we woke up to sunshine and birds chirping in the distance. We finished our trip on a high note, with hot oatmeal and a short hike without rain gear on. As the girls and I ate dinner back home in Indiana that night, I asked them what they liked the most of our trip. “Everything!” they said in unison. Proof enough for me that even a camping trip gone wrong beats no camping trip at all.

The Truth About Backpacking Solo with Kids

5 Tips for Taking the Kids to the Park

3 Ways You Can Help Get a Child Outside

A school in Sydney bans the children from using the playground before school, saying the decision was made to "support positive classroom behaviour and learning." But did anybody bother to actually look into the research on the benefits of outdoor play, both in terms of children's ability to focus and their academic performance...? The parents aren't happy about the decision and I understand why. ... See MoreSee Less

A decision to restrict students from using the playground before school started has sparked an angry response.
View on Facebook
· Share

📚📚📚Book Cover Reveal📚📚📚A few years ago, I did a poll in my social media channels to see what topic you’d like me to explore in my next book. One of them won by an overwhelming margin: the Nordic outdoor tradition friluftsliv. Well, I heeded your call. I’m pleased to share that it’s now possible to pre-order The Open-Air Life: Discover the Nordic Art of Friluftsliv and Embrace Nature Every Day from just about any place that sells books! The Open-Air Life is for anybody who is longing to lead a simpler, happier and less hurried life. It shows you how to channel the power of nature connection to improve your physical and mental health, as well as your relationship with both other people and Mother Nature. Plus, you’ll learn a few party tricks, like lighting a campfire without matches and cleaning water on the go. At a time when more and more people are starting to appreciate why they should spend more time outside, this book will show you how, with a decidedly Nordic twist.I must say that I LOVE this dreamy cover that the designers at @penguinrandomhouse created. What do you think? Pre-order The Open-Air Life here to support local book stores: bookshop.org/a/79880/9780593420942 ... See MoreSee Less
View on Facebook
· Share

Friends, I'm thinking about putting together an outdoor napping guide and would love some input. What would you like to know about this practice? What tools would you need to get started? Hit me with your questions!👊🏼😊 ... See MoreSee Less
View on Facebook
· Share

It’s TICK season…🕷 (I know that’s a spider emoji, but you get the idea😅)A lot of people freak out at the sight of these blood suckers and understandably so, considering the diseases they can harbor. But they too are a part of nature and if we want to keep venturing outside during the warmer months (I definitely do and I suspect you do too) we must come to terms with them.If you want to know more about tick prevention, I just wrote a pretty detailed post about it on my blog. Head over to rainorshinemamma.com to learn more and share this post with others who worry about ticks!👌🏻________________________#theresnosuchthingasbadweather #rainorshinemamma #friluftsliv #ticks #tickprevention ... See MoreSee Less
View on Facebook
· Share

I missed a meeting Sunday night😬 An informal meeting, yes, but still…I take pride in being dependable and prompt, and I hate to be flakey. I’d like to think that it was because I got distracted when my daughter called from my mom’s house and said she was running a fever, but in reality I got sidetracked well before that. Weekends are my time to zone out from schedules, emails and social media, and spend more time outside, especially this time of the year. So I missed a meeting. But I gained a quiet paddle through pastel waters as the sun slowly descended below the spruces on the horizon. __________________________#theresnosuchthingasbadweather #rainorshinemamma #sup #standuppaddle #sweden #sweden_photolovers #sweden_images ... See MoreSee Less
View on Facebook
· Share

I missed a meeting Sunday night😬 An informal me

Having scientific reasons and explanations for doi