Last week I wrote about being fined for letting my kids play in a creek at a nature preserve managed by the Indiana Department of Natural Resources. The post set off a firestorm of comments, shares, and discussions about children’s access to nature versus the need to protect it, in a way I never would’ve imagined. Clearly, what I wrote struck a nerve. Out of concern for my family and because it was an ongoing issue, I took the original post down. But the response made me think it’s an important debate that we still need to have. 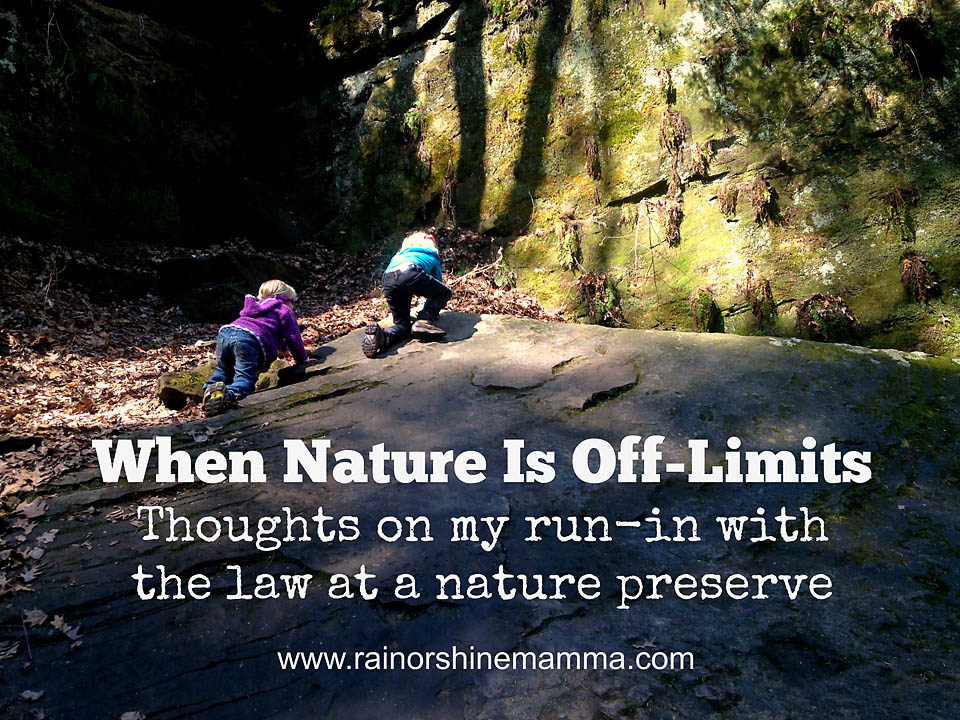 After my story broke, the locals that know the preserve first-hand overwhelmingly sided with me, and many testified to having done exactly the same thing. Naturally, that doesn’t make it legal, but it tells me that we weren’t out of line for believing that letting our kids get into the creek was OK.

One woman shared her frustration over being fined for having a picnic with her family at the same preserve, another offered to help me pursue a change of the rules. A third, a mom who’s let her kids play in the creek too, said she won’t go back after learning about our fine. I have a feeling she’s not the only one, and that’s too bad.

Many wondered if there were any “No Swimming” signs at the preserve (the answer is no), but that doesn’t even matter. The statute that we allegedly violated, Indiana Administrative Code 312 IAC 8-2-9, more or less makes it illegal to swim (and apparently wade) in the water at any state nature area, unless it’s a “designated swimming beach or pool,” or you’re doing it from a boat. If there’s no sign explicitly saying that it’s allowed, the presumption is that it’s prohibited.

Some commenters were less supportive. One woman suggested that I should’ve “checked my sense of entitlement at the gate” before I entered the preserve. Maybe. I know that attitude stems from my upbringing in Scandinavia, where people’s access to nature is actually considered an inalienable right.

In Sweden, where I grew up, the protection of natural areas relies on an honor system that simply can be summed up with “Do not destroy, do not disturb.” Nature preserves have stricter rules, but even there people are allowed to have picnics, leave the trail and usually pick common flowers, as well as forage for mushrooms and berries. And no, nowhere would children playing in a creek be considered a crime or a threat to the environment. Similar rights and responsibilities apply in the other Scandinavian countries.

Interestingly enough, Scandinavia is recognized internationally both for its pristine natural areas and for excelling in environmental protection. I’m sharing this because it tells me that nature can thrive despite – or maybe because of – a more complex code of ethics than the “look, don’t touch!” approach.

David Sobel, author of Beyond Ecophobia: Reclaiming the Heart in Nature Education, is on the same track when discussing environmental education in this Orion Magazine article. “Ironically, this ‘take only photographs, leave only footprints’ mindset crops up in the policies and programs of many organizations trying to preserve the natural world and cultivate children’s relationships to it,” he writes.

The US is not Scandinavia – I get that. The US has different traditions and rules, as well as some unique challenges. The most popular national parks get millions of visitors every year, and high traffic areas need special protections, so they don’t get loved to death. In addition, the US has the dubious recognition of being the most sue-happy nation in the world. Better then to hedge your bets and have too many rules than not enough, the thinking seems to go.

At the same time, we need to offer ways for young children to interact with nature in a meaningful way. While adults may be contented with walking on a trail and taking in the scenery, anybody that has young children knows that this doesn’t normally cut it for them. They want to see how high they can climb in that tree, pretend that those rocks just off the trail are a dinosaur cave, collect colorful leaves from the forest floor and yes, stick their feet in the water. More often than not, this is not allowed.

“Too many parents and people in authority have embraced rules that their own parents would have scoffed at,” said Michael Lanza, author of Before They’re Gone: A Family’s Year-Long Quest to Explore America’s Most Endangered National Parks

and The Big Outside blog, in response to our incident. “Unless we push back against this trend, we risk raising a generation of children who don’t value outdoor time or even preserving places like this, where kids can’t even play in a creek.”

Fighting our fine in court would cost many times more than to pay the fine outright, and would likely come down to whether there was enough signage or some other technicality, rather than make a bigger point about children’s access to nature. Regardless of the outcome I have a feeling taking this to court would only result more signs detailing various bans. And believe me, that’s really the last thing I want. For that reason, we’ve decided not to contest the charge in court.

Done right, I think it’s possible to both meet families’ desire for outdoor recreation and protect nature, for example by allowing children to play freely in less sensitive areas and  pick some common flowers, as former ranger Matthew Browning suggests in this excellent Slate article. As the rise of the Children and Nature movement has proved, people are waking up to the fact that kids who grow up playing freely in nature are the ones that will love and care to protect it later in life. Or as Richard Louv puts it: “…the human child in nature may well be the most important indicator species of future sustainability.”

And by treating nature like an outdoor museum where everything is off limits, that human child in nature may well become extinct.