I was six years old when my parents gave me the gift of skiing.

That’s when they packed me into our green Volvo station wagon, drove six hours north to the closest decent ski resort, and let me loose on the bunny hill. It was the first of many similar trips. I call it a gift because being able to ski downhill has given me a lot over the past 30 years – confidence, adventure, friendships. And – more than anything – a reason to enjoy the outdoors  even during the darkest, gloomiest days of the Swedish winter. 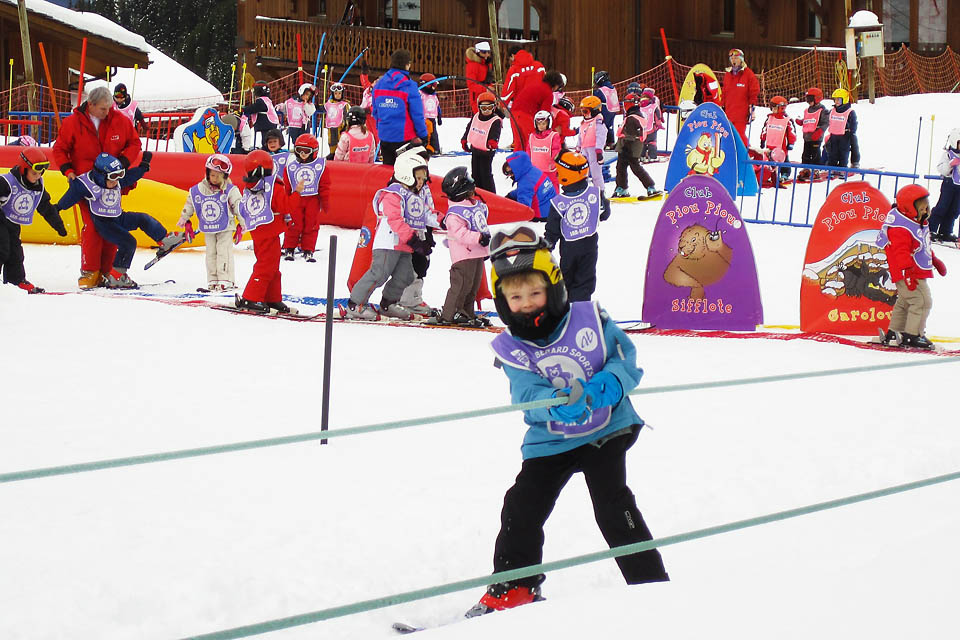 Nowadays I’m the one hauling little ones to the mountains. The past couple of years my skiing days have mostly been spent on the bunny hill shouting “Pizza to the right!” “Pizza to the left!” and “Don’t forget your pizzas!” (And no, I’m not talking about eating – for those unfamiliar with American ski lingo, “pizza” is what used to be called “plowing” when I was little.) All in vain, since my children prefer to go “french fry,” speed skiing style, while laughing hysterically at my attempts to slow them down.

I thought I’d done the most challenging skiing of my life in the black diamond tree runs in the Rocky Mountains in Montana.


But that was before I’d spent an entire day with my back bent over, hauling a 3-year-old up a vintage rope tow on a slushy bunny hill in the Midwest. I’ve had sore legs from skiing before, but I’d never felt like my arms and back got run over by a snowcat until I tried to teach my kids how to ski.

Physical exertion is not the only challenge. Emotions sometimes run high on the mountain, especially with the Little Naturalist, who is less likely to realize when she’s too tired, too hungry or too cold to go on.

As much as she loves skiing, there is also frustration and anger and tears. Over pizzas that turn into a pile of tangled chopsticks, falls that hurt and parents who won’t let her go up the chair lift even though she KNOWS that she’s ready for it and is willing to scream at the top of her lungs to make her point clear. (For what it’s worth, these meltdowns don’t just afflict kids – I’ve seen relationships brought to the brink of destruction as a result of one party trying to teach the other how to ski.)

With the kids’ difference in age and skill level, my husband and I often split up, each trying to cater to one child’s needs at a time. The days of us skiing together, like we used to before we had kids are, for the time being, gone.

But for the love of skiing we keep coming back to the hill.


I admit that introducing the girls to downhill skiing was partly a selfish move on my part. I wanted us to have an outdoor sport that we could enjoy together, just like my parents and I did when I was little. But I also knew that a parent’s will only will go so far when it comes to skiing. At some point, the girls would have to discover the magic of the mountain themselves.

The Little Naturalist was three the first time we strapped her into a pair of skis. I was hesitant, but after she had seen her older sister do it, sledding just wasn’t going to cut it for her anymore. She loved it – for a day. The next day she refused to get out of the car, kicking and screaming to make her point. I was never able to figure out why and I didn’t push it. BUT. This year she turned four and skied three days straight, riding the chair lift and getting her feet wet on green runs for the first time.

The Big Naturalist was five years when she first went down a bunny hill and now that she’s almost seven the pieces are really starting to fall into place. Last weekend we both tried snowboarding and whereas I gave up after two (very painful) attempts on the bunny hill, she persevered and is already begging to go again.

The rewards of skiing (or snowboarding) are not instant, but now that my girls are getting older, I witness progress by the hour. First time going up the rope tow by themselves. Check. Going down the bunny hill without help. Check. Riding the chair lift. Check.

And then, boom, the inevitable day when they’ll both be faster, bolder and better than me.


Learning a new sport is always challenging. But as long as we have more giggles and hot chocolate than meltdowns and tears, I think we’re good. At this point I feel pretty confident that we’ve seen the beginning of a new era, one in which skiing will bring us together as a family. Last weekend was a good indicator of what is to come – for the first time we were all able to ski a green run together.

The time for black diamond tree runs in the Rockies will come again, and before I know it we may be doing them together – as a family. That’s when I’ll know that our sweat equity – and tears – on the bunny hill will have paid off.