Snakes. Love them or hate them – if you’re an outdoorsy person, chances are you’ll encounter them at some point. Although snakebites are rare, it’s always best to be prepared, especially if you have kids in tow. This week, fellow outdoor blogger and mom Saskia Cameron from SniffOutdoors.com is sharing some of her best tips for protecting children from a snakebite.

There’s nothing like the feeling of leaving the grind of daily life behind and enjoying the great outdoors. Of course, since becoming a mom, I’ve had to slightly (okay, ‘slightly’ may be an understatement!) change my usual approach.

In addition to our pack weight going up by quite a few pounds and group noise levels by a multiple of decibels (!), our family preparation drill has now become standard practice. And as a keen trekker who’s often ventured into snake country, I know how important it is to teach kids about safety while out on the trail.

The good news? Snakebites are relatively rare, with roughly 8,000 people in the U.S. getting bitten each year, and just over 1,300 of those being children.

Now, don’t let these numbers scare you. Only a handful of bites result in death – and many cases are preventable. The best way to avoid a snakebite is to educate yourself and your kids before heading out. Just a few simple measures and you’ll be just fine.

This useful infographic from Sniff Outdoors goes over how to identify venomous snakes, prevention techniques and how to respond if bitten. Keep reading for additional tips on how you can prepare yourself and what to do in the rare case your child is bitten.

Of all the snakes you come across in the United States, only about 10% are venomous. The above infographic covers the four different types of venomous snakes in the country and how to recognize them, but here are some general rules for identifying one:

Remember, these are only general guidelines, so to better prepare yourself you should do additional research on snakes in the area you will be hiking in before heading off. There are exceptions to the rules above, as not all colorful snakes are venomous and some, like the coral snake, have a round-shaped head, so take this as a loose guide only.

Snakes are different depending on the geographical area, so always refer to articles written by local snake experts, as they will contain the most reliable and relevant information. 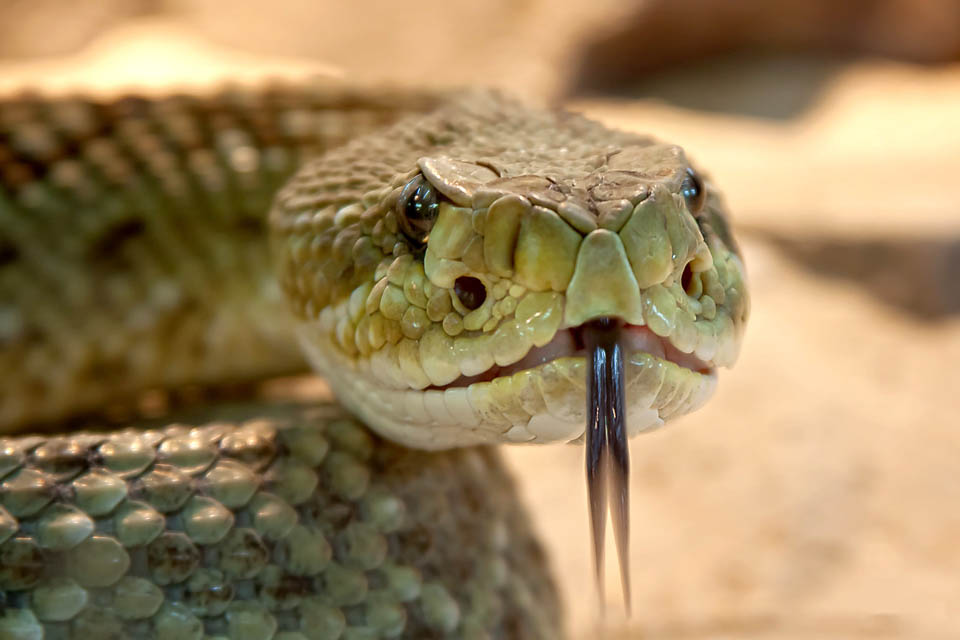 The best way to prevent your child getting bitten by a snake begins with education. Before you head off on your trek, be sure to sit your child down and go over some important information on how to behave on a hike.

There are only bad clothes: When going trekking you want to make sure you wear the right clothing, and this is particularly important when venturing into snake country. Feet and ankles are often the first places you will get bitten, so opt for enclosed protective footwear such as boots, along with long pants. To be extra safe, tuck pants into the socks, so ankles aren’t exposed.

Stay on the trails: Snakes like to stay hidden from view, which means you are more likely to find them hiding in tall weeds, rock piles, and underbrush. To avoid them, keep to the trails where you can clearly see where you are stepping and always stay ahead of your children.

Make some noise: This is the one time when you don’t have to worry about your kids being too noisy when you’re out of the house! Teach your children to make plenty of noise while trekking as this will alert snakes to your presence and give them enough time to leave.

Always double check: Snakes are good at concealing themselves, so always be extra careful when sitting down, stepping on rocks and logs, and collecting firewood.

Leave it alone: Teach your child that should they ever come across a snake, they need to respect it, leave it alone, and just allow it to pass. Never approach or try to handle it, even if it appears dead, as even a dead snake can bite several hours after death. While snakes are not aggressive, they are defensive, and in 50-70% of cases, reptile bites are provoked by the person who was bitten.

Be aware of peak times: Snakes are most active in the warmer months, April through October. During these warm periods, they will be most active at night. You may come across a snake during the day in spring or fall, or even during the winter if it’s a warm day. According to a study published by the American Academy of Pediatrics, a third of all snakebites in children between 2000 and 2013 took place in June and July, so this is the time to be extra vigilant.

What To Do If They Get Bitten

If your child does suffer a snakebite, don’t panic. The chances of it being fatal are miniscule, but seeking immediate medical attention is essential. Don’t waste any time waiting for symptoms to appear, call 9-1-1 right away, as you will need to get yourself to the nearest medical facility.

If you can, take a photo of the snake to help identify the type and whether it is venomous, but never put yourself in a position of danger and don’t try to catch it. Don’t give any medication, use ice, or a constricting band or suction. Using “extractors” can increase tissue damage and will not remove a significant amount of venom. What you should do, as the infographic suggests, is remove shoes or jewelry and loosen tight clothing from the bitten limb.

Your child will likely be feeling scared and upset, so try to remain calm and get them to relax and move as little as possible. This is where your mothering instinct will kick in, use any techniques you have at your disposal to keep them calm, such as talking to them in a soothing tone and distracting them with a story.

And that’s all there is to it! Remember, chances are a bite won’t be from a venomous snake or it’ll just be a ‘dry’ bite (i.e. no venom in it) anyway –don’t let simple preventative measures turn into anything scarier for your kids. The outdoors is there to be enjoyed, so get out there without worrying (too much!).

Saskia Cameron is an outdoors blogger at SniffOutdoors.com. She’s a keen trekker, a devoted mother, and has a tiny addiction to milk chocolate (don’t tell the kids!). She’s particularly interested in wilderness first aid training and helping to make traveling with children just that little bit easier.

5 thoughts on “How to Protect Your Child from a Snakebite”