When Richard Louv’s book Last Child in the Woods: Saving our Children from Nature-Deficit Disorder was published in 2005, it inspired the birth of a new movement that focuses on reconnecting children with nature. Considering that today’s average preschooler is more likely to correctly identify the Mighty Eagle from the video game Angry Birds, than a real American bald eagle, the fundamentals of the book still hold true. Louv, meanwhile, went on to co-found the Children and Nature Network and now travels across the country to advocate for a more nature-rich future in his role as the informal leader of a the new nature movement. 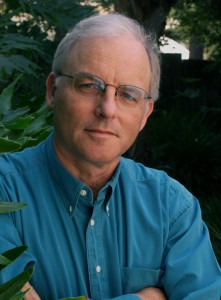 So what exactly is this movement about? Why all these efforts to get kids outside to smell pine cones and dig up earth worms, when we have issues like climate change and deforestation to worry about? For a number of reasons, one of them being that children who connect with nature by playing outside are more likely to turn into environmentally responsible adults.

In Louv’s words, if you remember playing outside as a kid you probably have “that special place in your heart” that you become protective of and carry with you for the rest of your life. It could be the woods behind your house, the lake where you learned to swim or the park where all the neighborhood kids used to gather and play. The million-dollar question, of course, is what will happen if the next generation grows up without the experience of playing outside, and without these special places in the natural world.

Rain or Shine Mamma recently sat down with Louv during one of his appearances during Take a Child Outside Week, and talked about the progress and challenges of the new nature movement.

It’s been eight years since Last Child in the Woods was published. What has happened in that time that gives you hope that we’re heading toward a more nature-centric future?

”There’s evidence that every day we do more to connect to nature. It was percolating then, and now it’s boiling. We’re seeing a rise in nature preschools, interest in green schoolyards and family nature clubs. There are over 100 regional campaigns all over America that are working to bring conservatives, liberals, ranchers and conservationists together; people who normally don’t even want to be in the same room.”

“On the other hand, I see those as counter trends to the sometimes stronger negative trends. What’s coming down the pipe is huge economic pressure from corporations who want to make schools a completely virtual environment. And that’s just wrong. The American Association of Pediatricians says kids under two shouldn’t get near electronics. I’m not anti-tech, but like I state in The Nature Principle, the more technology we have, the more nature we need. Now we send our kids to school, tell them to sit on a chair, take the test, then we cut recess, cancel field trips, and if they act out we give them Ritalin.”

Where does the support for the new nature movement come from?

“The nature movement doesn’t have the economic force behind it but we’re seeing a lot of teachers and parents who are starting to pay attention. I can’t tell you how many teachers have told me that the troublemakers in the class become the leaders when they take the class outside. The big environmental organizations have finally gotten on board as well. In the past they’ve mostly given patronizing attention to children but now they realize that their membership is ageing. And they realize that their survival depends on this. The average age of the members of one of the biggest American environmental organizations is 78. And the average age of its new members is 74. ”

What role does the school system play in the new nature movement?

“I think the growth in homeschooling is part of the movement. A lot of people homeschool for political or religious reasons, but now we’re seeing people basically creating nature preschools at home. I think that if the education system keeps going in the direction where it’s going we’re going to have a rebellion. And we will see a lot of growth in alternative education, like Waldorf schools.”

“Another thing is that a lot of college students are discouraged. They want an energy efficient society, but that’s not enough. What we really need is a nature-rich society, not just a sustainable society. We have got to aim higher. And a powerful source to create a better future is nature-rich schools.”

The task of restoring the bond between children and nature can seem overwhelming – where should a parent start?

“It’s not so much that the solution lies with the individual, but with networks of individuals. Good programs will rise and fall in isolation. We have to network and learn from each other, and we have to have things that are self-replicating, like family nature clubs where parents band together. And we need to change our habits as parents but recognize how hard that is because of fear. Fear of strangers, litigation and nature itself, much of which is fanned by (the media). I never shame parents who feel this fear, but it’s not rational. We have to recognize and honor the fear, so we can deal with it. Just because the statistics don’t support that fear we shouldn’t expect it to go away overnight. What we need is alternative ways for children to connect with nature.”

What do you do yourself to get outdoors despite your busy schedule?

“I’ve always been outdoors, fishing, hiking and taking pictures, but because of (Last Child in the Woods) I’ve had to sit a lot on airplanes lately. I’ve figured out that on days when I’m outside I tend not to worry and my mental attitude is much better. If I’m able to do this twice a week, my mental health improves over 30 percent. What pill can you take that has that effect? There may be some, but they also make you sleepy. So that’s a very simple prescription that I prescribe to myself.”

What makes you think that the new nature movement will ultimately be successful?

“Nobody wants to be in the last generation that remembers when it was considered normal and expected for children to go outside and play. Nobody.”

What’s the Outdoor Place in Your Heart?

Kids NEED More Nature! Here’s How to Make it Happen.

Spring Nature Study: Life and Death in the Forest

A school in Sydney bans the children from using the playground before school, saying the decision was made to "support positive classroom behaviour and learning." But did anybody bother to actually look into the research on the benefits of outdoor play, both in terms of children's ability to focus and their academic performance...? The parents aren't happy about the decision and I understand why. ... See MoreSee Less

A decision to restrict students from using the playground before school started has sparked an angry response.
View on Facebook
· Share

📚📚📚Book Cover Reveal📚📚📚A few years ago, I did a poll in my social media channels to see what topic you’d like me to explore in my next book. One of them won by an overwhelming margin: the Nordic outdoor tradition friluftsliv. Well, I heeded your call. I’m pleased to share that it’s now possible to pre-order The Open-Air Life: Discover the Nordic Art of Friluftsliv and Embrace Nature Every Day from just about any place that sells books! The Open-Air Life is for anybody who is longing to lead a simpler, happier and less hurried life. It shows you how to channel the power of nature connection to improve your physical and mental health, as well as your relationship with both other people and Mother Nature. Plus, you’ll learn a few party tricks, like lighting a campfire without matches and cleaning water on the go. At a time when more and more people are starting to appreciate why they should spend more time outside, this book will show you how, with a decidedly Nordic twist.I must say that I LOVE this dreamy cover that the designers at @penguinrandomhouse created. What do you think? Pre-order The Open-Air Life here to support local book stores: bookshop.org/a/79880/9780593420942 ... See MoreSee Less
View on Facebook
· Share

Friends, I'm thinking about putting together an outdoor napping guide and would love some input. What would you like to know about this practice? What tools would you need to get started? Hit me with your questions!👊🏼😊 ... See MoreSee Less
View on Facebook
· Share

It’s TICK season…🕷 (I know that’s a spider emoji, but you get the idea😅)A lot of people freak out at the sight of these blood suckers and understandably so, considering the diseases they can harbor. But they too are a part of nature and if we want to keep venturing outside during the warmer months (I definitely do and I suspect you do too) we must come to terms with them.If you want to know more about tick prevention, I just wrote a pretty detailed post about it on my blog. Head over to rainorshinemamma.com to learn more and share this post with others who worry about ticks!👌🏻________________________#theresnosuchthingasbadweather #rainorshinemamma #friluftsliv #ticks #tickprevention ... See MoreSee Less
View on Facebook
· Share

I missed a meeting Sunday night😬 An informal meeting, yes, but still…I take pride in being dependable and prompt, and I hate to be flakey. I’d like to think that it was because I got distracted when my daughter called from my mom’s house and said she was running a fever, but in reality I got sidetracked well before that. Weekends are my time to zone out from schedules, emails and social media, and spend more time outside, especially this time of the year. So I missed a meeting. But I gained a quiet paddle through pastel waters as the sun slowly descended below the spruces on the horizon. __________________________#theresnosuchthingasbadweather #rainorshinemamma #sup #standuppaddle #sweden #sweden_photolovers #sweden_images ... See MoreSee Less
View on Facebook
· Share

I missed a meeting Sunday night😬 An informal me

Having scientific reasons and explanations for doi