There’s a classic scene in the 1938 short film by Disney, Ferdinand, where the mother of the peaceful bull asks him why he prefers to sit under his cork tree over play-fighting with the other bulls. The placid bull responds, “I like it better here where I can sit just quietly and smell the flowers.” While his peers vie for fame and glory in front of the crowds in the bull-fighting arena, Ferdinand is contented with relaxing in solitude under a tree. I sympathize with Ferdinand, and not only because he tries to evade a life of bull-fighting, a cruel practice which is grossly romanticized in the film. No, I can relate because I feel like he’s a fellow introvert in a world geared toward extroverts, and because he ultimately finds solace in nature.

Contrary to popular belief, extroversion and introversion actually co-exist on a spectrum and most children fall somewhere in between the two ends, but in general, they can usually identify more with one or the other (unless they’re right in the middle, in which case they’re an ambivert). Extroverts are outgoing, talkative, thrive on company and like working in groups. Often described as “the life of the party” extroverts enjoy being the center of attention and are energized by social events. Introverted kids, on the other hand, feel drained by the same type of situations that excite extroverts and need time and space to withdraw into their own mind to rest. They usually have a smaller network of close friends, enjoy quiet reflection and are don’t mind being alone.

Considering this, I think it’s safe to say that the average modern classroom favors extroverted children over their introverted peers. Students spend the entire day in a tight space with a group of up to 30 other kids, often in a noisy, busy environment. Group assignments and oral exams are legion and grades awarded in great part depending on how frequently students raise their hands to answer questions and how well they present in front of the class. Moreover, they’re constantly bombarded with messages about the importance of working as a team, speaking up, being social and daring to lead. All these skills are good to work on, of course. But for introverted kids, doing so is more taxing and at school there is little – if any – time for recuperation. The pressure to be a part of social activities after school is often high as well. Again, both extroverted and introverted children may enjoy their basketball practice or dance class after school, but introverted children are more likely to feel mentally exhausted afterwards.

To be perfectly clear, and as I write in my book The Open-Air Life: Discover the Nordic Art of Friluftsliv and Embrace Nature Every Day, ALL children need nature. However, based on their personality traits, introverted children may in some respects benefit even more from spending time outside. I see at least three reasons why we should make nature time a priority for introverts:

Silence. Introverts are more sensitive to and easily distracted by noise. A constant barrage of background noise, whether from loud classmates, traffic or music, can cause them to feel overstimulated and drained. In nature, on the other hand, background noise from human activity is dampened by trees, shrubs and other vegetation. As a bonus, natural areas also feature sounds that are relaxing, like bird song and trickling water, providing a calming environment for the introverted child.

Happiness. Introverts tend to be less happy and more prone to depression when compared with extroverts. That makes seeking out nature even more important to introverts, since numerous studies show that green spaces and blue spaces increase feelings of well-being and decrease mental distress. There are several theories why being outdoors makes us happy but it likely has to do with the fact that we’ve evolved in the natural world and therefore feel an affinity toward it.

School isn’t likely to get easier on introverted children anytime soon, but by giving them the opportunity to experience nature we can support their unique cognitive and emotional needs. Take a good look at their schedule as well. If their extra-curricular activities are not giving them enough downtime to decompress, it may be time to clear up some space in the calendar. After all, some of us will always be happier just sitting under a cork tree, smelling the flowers. 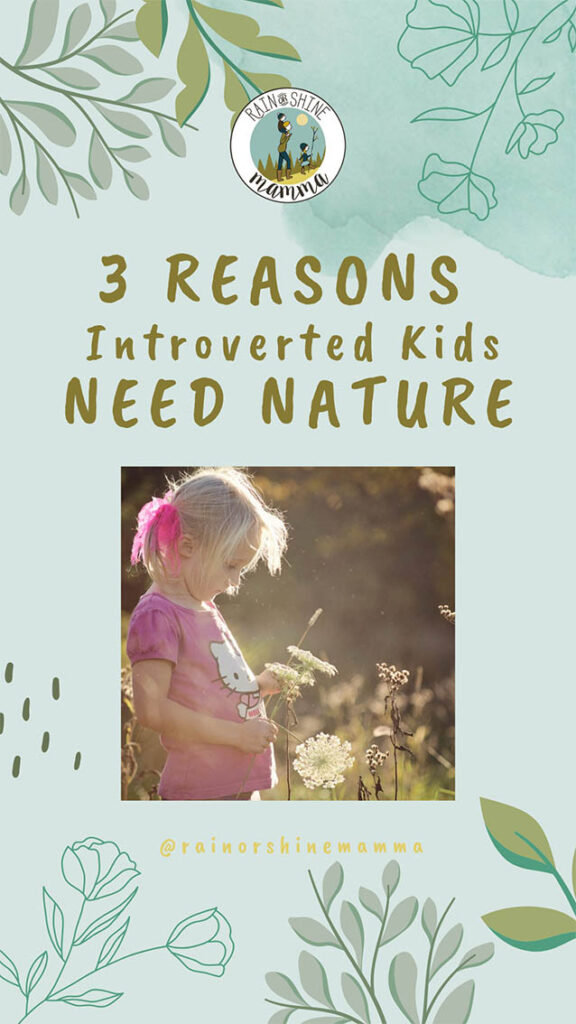