The other day, I received an email from a “Chelsea,” sent from an address that I didn’t recognize. “Probably spam,” I thought to myself and was just getting ready to trash it when the subject line caught my attention: “Social Media Aids Killer Clown Epidemic: Online Safety ALL Parents Must Know.”

Now that got my attention. At the very start of the email, right underneath the cheery opening “Hi Linda!” was a photo of a man dressed up like a clown, complete with an enormous rainbow-colored afro, bad teeth and a menacing grin. He’s holding some balloons in his left hand, and his right index finger is pointing upward, gesturing for the viewer to come over.

Here’s the thing. I’ve never liked clowns, not even when I was a child. I wasn’t scared of them; I just never found them particularly funny. No offense to anybody who works as a professional clown; I’m sure you brighten a lot of children’s lives on a daily basis. Grown men stumbling around in oversized shoes wearing white makeup, red plastic noses and crazy wigs was just not my idea of a good time. Then, when I was in my teens, I watched the movie It, and I could never look at a clown the same way again. Stephen King’s demonic character Pennywise – a clown that preys on children – gave me nightmares. 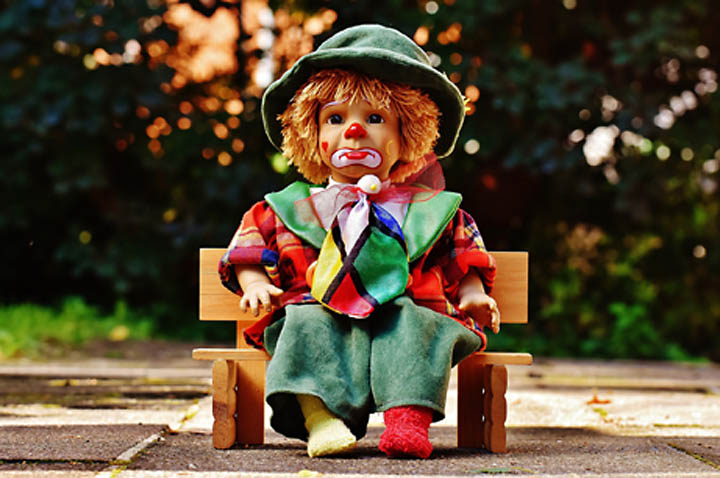 “As I’m sure you’ve seen, countless stories have been released stating the ‘Killer Clown epidemic’ as creepy clown sightings have been popping up across the country without explanation,” the email from Chelsea starts. “Today, social media is aiding the circulation of this dangerous (and alarming) content, causing the threats and sightings to go viral and police involvement.”

Since I hadn’t actually heard about this “epidemic” I dutifully followed the link in the email to find out what it was all about. The epicenter of the clown sightings appears to be Greenville, South Carolina, where kids claim to have been offered cash by clowns lurking in the woods near an apartment complex. Since then, a number of clown encounters have been reported across the country, alongside appearances on social media, where some people posing as clowns have posted threats against schools. Police departments are getting bogged down with calls about clown sightings and some departments are now threatening to arrest anybody wearing a clown costume in public. Some schools have been put on lock down or canceled classes. In some places, people are taking matters into their own hands and arming themselves.

And then there are people like Chelsea, who didn’t just send me that email to give me a heads-up about people hanging out in dark parking lots wearing bald caps and red plastic noses. She was trying to get me to promote a certain type of parental control software that would help protect my kids against “these frightening images and threats that could lead to serious danger.” (Never waste a good crisis, right?) Since I have little patience for fear mongering and my girls are not even old enough to use social media yet, I moved the email to my junk folder with a swift click of the mouse, and moved on with my day.

Then the girls came home from school.

“Mom! We need to talk to you,” the Big Naturalist said, visibly upset, as soon as they came in the door. “There are clowns that are killing children! For real!”

They had heard it from other kids at school, who in turned had heard something about clown sightings on TV. Now some of their classmates are scared to death, whereas some are themselves feeding the frenzy by seeing imaginary clowns everywhere. Others are so freaked out by people in costumes that they no longer want to celebrate Halloween.

With that, the clown scare had officially reached rural Indiana, and I could no longer ignore it. Instead I talked to the girls at length about clowns, creeps and the power of the media. While I made sure to take their concerns seriously, this is what I told them:

The clown frenzy is just another example of how quickly fear can get the better of us. Fear – of strangers, flashers, kidnappings, injury and [insert peril of your choice] – and the perception that our children are in constant danger, are a major reason why many parents are reluctant to let their children play outside without constant supervision today, even though statistically our children are safer than ever.

So let’s all calm down and take this down a notch.

A 13-year-old girl in Pennsylvania is believed to be behind some of the threats, and dozens of other reported sightings have already been debunked as hoaxes. Some are speculating that other appearances are part of a viral marketing campaign for a horror movie that is soon to be released. Whatever reasons people have for these twisted jokes, the damage is done. In Tucson, professional performers are getting so fed up with the image of clowns as “psycho killers” that they’re staging a protest and offering free hugs to the public.

I still don’t care much for clowns as entertainment, and to this day Pennywise gives me the creeps. But whether we like clowns or not, we owe it to our children be rational about this and leave the “killer clowns” where they belong – in the movies.